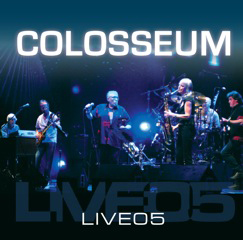 Once more, the extraordinary musicians of Colosseum have produced an equally extraordinary and first-class live album. During the summer tour of 2005 Miles Ashton, the great live sound engineer who runs his own studio in Watford, recorded all of Colosseum’s concerts to 24-track digital. Guitarist Clem Clempson and Keyboard player Dave Greenslade spent long days at Clem’s studio auditioning all the performances looking for that magical mix of performance and natural sound quality and put together a complete show to run over two CD’s. So now, you can enjoy a complete Colosseum concert with the fanstastic voice of Chris Farlowe, the virtuoso playing of Clem Clemspon, Dave Greenslade and Barbara Thompson plus the outstanding bass player Mark Clarke – and of course drumming legend Jon Hiseman.

The first set features performances from The Theaterhaus in Stuttgart / Germany ( June 11th 2005) together with the both “Lights” and the Jack Bruce Classic “Rope Ladder To The Moon” from The Music Hall in Worpswede / Germany ( April 23rd 2005 ). The second set was recorded at The Treibhaus in Innsbruck / Austria ( June 11th 2005 ).

Although Barbara Thompson played alongside Dick Heckstall-Smith on the first three original albums this new release is the first featuring her with the band – and she has bought a whole new dimension with her. The boys are more than delighted, especially since now they are seeing more women in the audience!