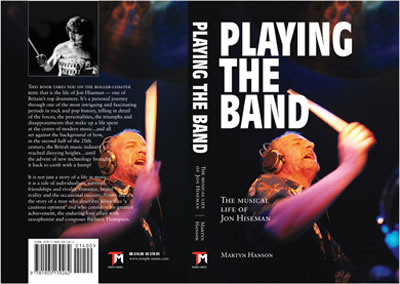 ‘Playing the Band’ – The Musical Life of Jon Hiseman

This book takes you on the roller-coaster ride that is the life of Jon Hiseman – one of Britain’s top drummers. It’s a personal journey through one of the most intriguing and fascinating periods in rock and pop history, telling in detail of the forces, the personalities, the triumphs and disappointments that make up a life spent at the centre of modern music…and all set against the background of how, in the second half of the 20th century, the British music industry reached dizzying heights…until the advent of new technology brought it back to earth with a bump!

It is not just a story of a life in music; it is a tale of individualism, survival, friendships and rivalry, romance, brutal reality and the occasional insanity. Above all, it’s the story of a man who describes himself as ‘a cautious optimist’ and who considers his greatest achievement, the enduring love affair with saxophonist and composer Barbara Thompson.

‘Playing the Band’ – The Musical Life of Jon Hiseman (and lots more besides!) by Martyn Hanson, published by Temple Music

Over 450 pages with over 100 colour and B&W photos from J&B’s private collection.