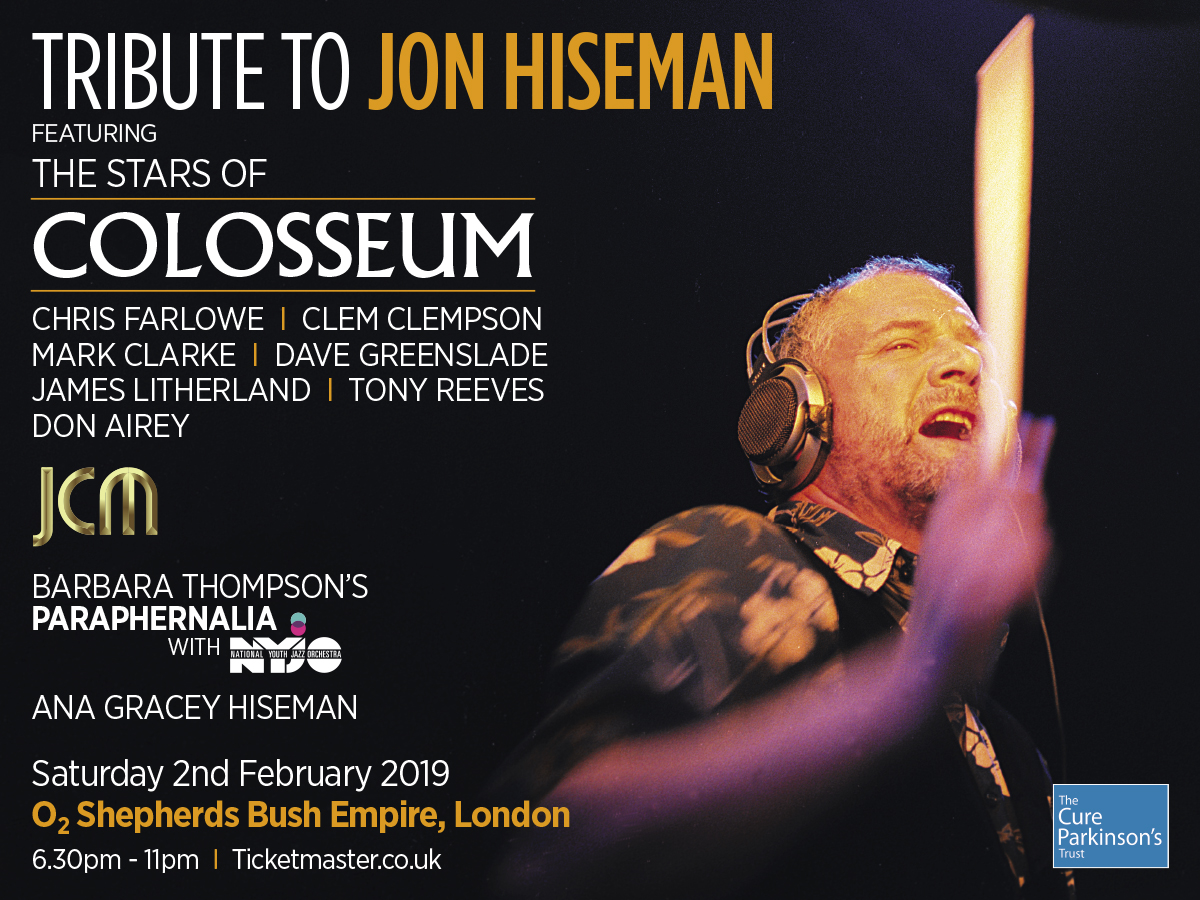 A Tribute to Jon Hiseman

Featuring JCM and the stars of Colosseum

The family, friends and stars of legendary jazz-rock pioneers, Colosseum, will come together for one very special evening at O2 Shepherd’s Bush Empire on Saturday 2 February, to celebrate the life and work of Jon Hiseman (June 1944 – June 2018).

“Colosseum’s farewell show at O2 Shepherd’s Bush Empire in February 2015 was a very emotional evening, the musicians gave one of the most heartfelt performances of their 46 years together. I’m sure this concert, in loving memory of Jon, is going to be even more special in that respect” says Clem Clempson.

Jon Hiseman was taken ill during his recent JCM (Jon Hiseman, Clem Clempson and Mark Clarke) tour and memorial donations can be made to National Youth Jazz Orchestra via a Just Giving page set up in Jon’s memory, who was always a great champion of new talent.

Throughout his career, Jon worked extensively with his wife, saxophonist Barbara Thompson, drumming with her jazz-fusion group, Paraphernalia and together, they composed for film and TV. The National Youth Jazz Orchestra will be performing with Paraphernalia – Peter Lemer (keys), Billy Thompson (violin) and Dave Ball (bass) – in their honour. Proceeds from the concert will also be donated to The Cure Parkinson’s Trust.

Ana Gracey, Jon and Barbara’s daughter, will open the show with her band, playing tracks from her new album, Wicked Games, a collection of pop songs given a jazz treatment, that also features guest appearances from her parents and Colosseum’s Clem Clempson.

“My dad saw the best in everybody and championed the talents of others all his life; he was my greatest fan and I know he’d get a big kick out of me opening his tribute show, and to see Paraphernalia once again performing my mum’s music, which was always a source of great joy and pride for him” adds Ana. “It’s comforting to know that for one last time he will bring together all those who admired, respected and were inspired by him during a lifetime of dedication to music. Dad, the beat goes on…”